0031681163949
stef@eubusinessdevelopment.com
How much percentage of the European companies is selling online

About one in six European companies that employ at least ten persons sold products and/or services via a website or apps last year. Among those companies, almost all of them sold to their own country, while less than half sold to customers located in other EU member states. Over a quarter of online-selling companies sold to non-EU customers.

These statistics were shared by Eurostat, which notices that the share of EU enterprises making web sales increased from 12 percent in 2010 to around 16 percent in 2014. “And since then, it has been relatively stable.”

97 percent of EU companies that sold online last year, did this to customers in their own country, while 44 percent sold to customers living in other countries that are part of the European Union. And 28 percent also sold to non-EU customers.

38% reported problems with selling to other EU countries

Still, almost two in every five companies that sell online to other EU member states, reported difficulties in doing so. This was mostly due to the costs of delivery and/or the linguistic barriers. Also adapting product labeling and/or judicial reasons related for instance to resolving complaints and disputes were among the popular reasons companies reported difficulties for their web sales.

Whereas the EU average share of companies selling online is 16 percent, it’s much higher in Ireland (26%), Sweden (25%) and Denmark (24%). In Romania (7%), Bulgaria and Poland (both 9%) however, there are still not many companies that sell products and/or services via an website or app. 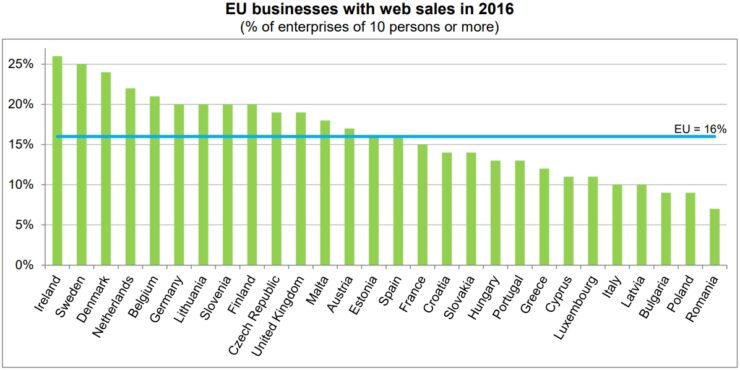